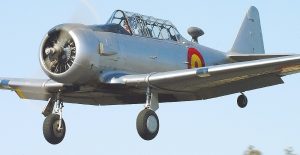 Designed in the early 1930s by North American Aviation as an advanced two seat trainer for the US Army Air Force, the Texan was so good it was ordered by the US Navy, Royal Air Force (RAF) and many other countries.

The Royal Air Force called them Harvard’s, the US Navy SNJ.

During the Mau Mau uprisings in Africa in the 1950s the RAF used Harvards as Ground attack aircraft with bombs and machine guns.

If you have seen the film Tora, Tora, Tora (the attack on Pearl Harbour) most of the Japanese aircraft in the film were actually highly modified Texans.

Only two Texans were used by the Royal Australian Air Force (RAAF), but the local Australian-built Wirraway Trainer is based very closely on the Texan and from this came the Boomerang fighter, and the 1950s Ceres agricultural crop dusting aircraft.

Our Texan was built in 1943 (C/N 84825) for the US Navy as an SNJ-5 which the British called the Harvard 111.  She saw service with the Spanish Air Force as C6-163 and was imported back to the USA but suffered a crash landing at Houston Texas in 1982, after which she was written off.

Brought to Australia for rebuild, she was re-registered in 1991 as VH-XAN (“TEXAN”).  She is now owned by a HARS member and is totally airworthy.