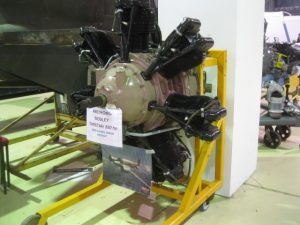 A simple, low stressed, robust, and reliable British designed radial (the cylinders radiate from a central crankcase) aero engine.  It has 7 cylinders of some ~834 cu in (~13.6 L) and was first built in 1935 by Armstrong Siddeley Motors Ltd for Royal Air Force (RAF) training aircraft.

Early variants of the engine were known as Lynx Major.

The Cheetah was so reliable it was the first aero engine rated by the RAF to run up to 1,200 hours of usage between major overhauls.

Our engine is serial #AS 4521 and is most likely from a RAAF Avro Anson.