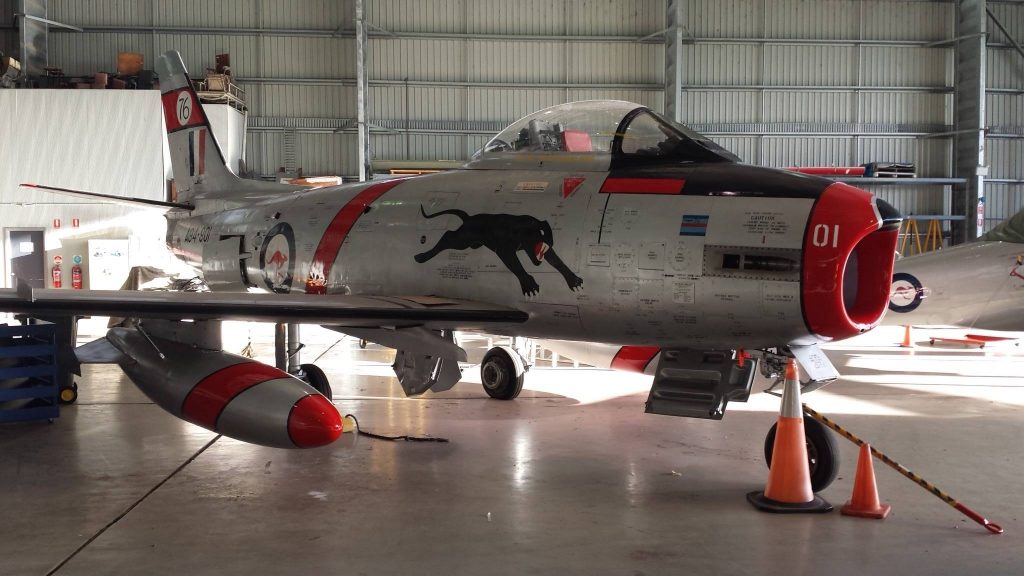 The HARS Sabre as she is now,all painted up and looking 1st class in her “Black Panthers” colour scheme and part of 76 Squadron at RAAF Base Williamtown. Note the Mk 2 Cannon fairings on her now with Maxim shock wave baffles.

Genealogy of the CAC 27

One cannot talk about the CAC 27 Sabre without discussing the North American F-86 Sabre from which it was developed.  A common mistake is to call the Australian Sabre an F-86.  This is not correct as the CAC 27 is a distinctly different type having not much more than the wings of the F-86 in common.

Development of what was to become the F-86 started during the latter stages of WWII.  At an advanced stage of development, it became apparent to the design team that the XP-86 as it was then was simply not going to meet the requirements the USAAF had set for it.  At about this time, German aerodynamic research data was starting to become available and it was realised that if they incorporated a swept wing in the design then this would greatly improve its speed and transonic capability.  It was time for one of those agonising decisions and there was a great deal of heated discussion as to whether they should back-track and all but start again.  Fortunately it was accepted that however distasteful this course of action was, it was needed.

Eventually, it was first flown in October 1947.

There is some controversy as to when and who broke the “Sound Barrier” first.  Some claim the F-86 prototype did so in a shallow dive as early as October 1947 two weeks before  Chuck Yeager in the Bell X-1.  The official USAF record is that the Sabre did so in a dive in April 1948. What is not in dispute is that the F-86 held speed records and was THE speed fighter for quite some time.

As early as 1949 the RAAF began planning a replacement jet fighter for the locally-built CAC Mustang and DHA Vampire. Successive aircraft under consideration included the Grumman Panther, the proposed CAC large, twin-jet, all-weather CA-23 fighter; and the Hawker P.1081. In the event as an interim measure, Gloster Meteors were obtained in 1951 for service with 77 Squadron in the Korean War. In the same year, plans were finalised for Commonwealth Aircraft Corporation (CAC) to build a locally-redesigned version of the North American F-86F Sabre swept-wing fighter.

The CAC Avon Sabre was based on the design of the North American F86 Sabre, modified to meet local conditions and requirements. CAC won the contract to produce one prototype (A94-101) and 70 production aircraft in February 1951. Due in part to the technical investigations initiated by CAC Manager, L J Wackett, the RAAF decided to modify the Avon Sabre making it different from the North American Sabre. The following list of modifications made a huge improvement over the original Sabre:

The resultant aircraft, sometimes called the Avon-Sabre, became arguably the best of the numerous Sabre variants built throughout the world.

The prototype CAC CA-26 Sabre Mk 30 (A94-101) first flew on 3 August 1953, with an imported Avon engine, piloted by Flight Lieutenant Bill Scott. During a test flight of this aircraft at Avalon Airfield on 21 August 1953, the pilot, Flight Lieutenant Bill Scott, took the aircraft to a height of 42 000 feet (12 800 metres), put it into a dive and at 36 000 feet (11 000 metres) exceeded the sound barrier (at an approximate speed of 1042 kilometres per hour), thus becoming the first aircraft in Australia to exceed the speed of sound.

Our aircraft (A94-901) was the first Sabre in RAAF service in July 1954.  It was actually the second Avon Sabre built just after the prototype.

A94-901 served with various RAAF Squadrons and was part of the 76 Squadron RAAF Black Panthers Aerobatic Team from 1961 to 1965 based at Williamtown.  HARS member Steve Jackson was maintenance officer for A94-901 in the RAAF.  A94-901 was struck off RAAF records in 1966, then used as a gate guardian at Fishermans Bend.  She was restored to static display by Hawker De Havilland at Bankstown and then to sent HARS.

Our aircraft is part of the Boeing de Havilland Collection on permanent loan to HARS. 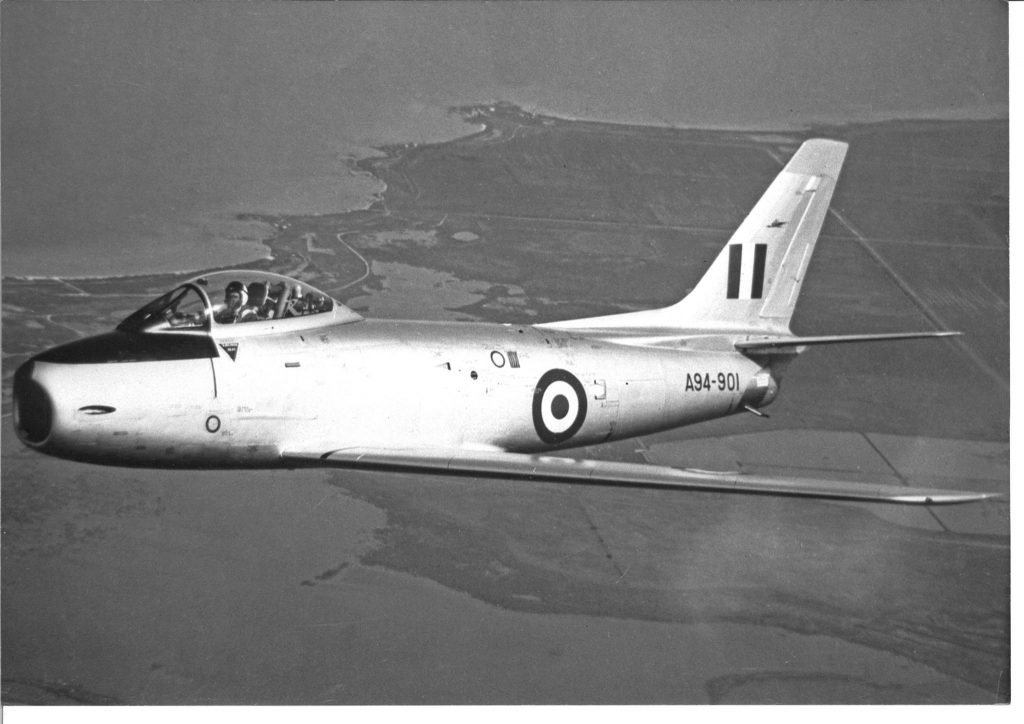 An early test flight in 1954 with the Mk1 cannon fairings for her 30mm Aden Cannons with no Maxim Silencer baffles yet fitted. The cannon fairings were modified to a Mk2 configuration with baffles as early testing showed that the cannon blast when firing was so powerful it could actual cause the engine to flame out. 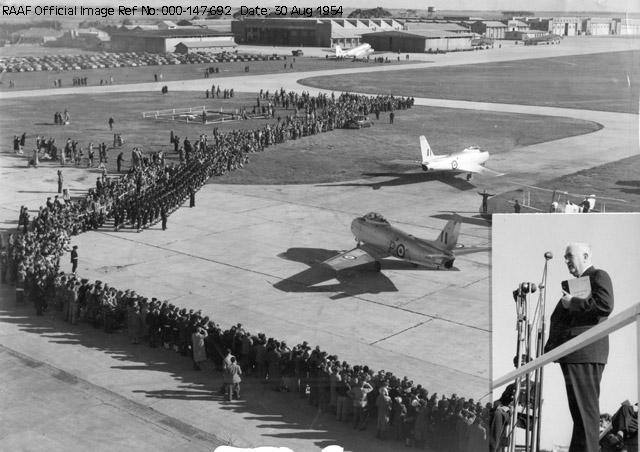 Our Sabre A94-901 leading the prototype Sabre A94-101 passed the official presentation dais with the then Australian Prime Minister Mr Robert Menzies taking the salute as the aircraft are presented to the Australian public.