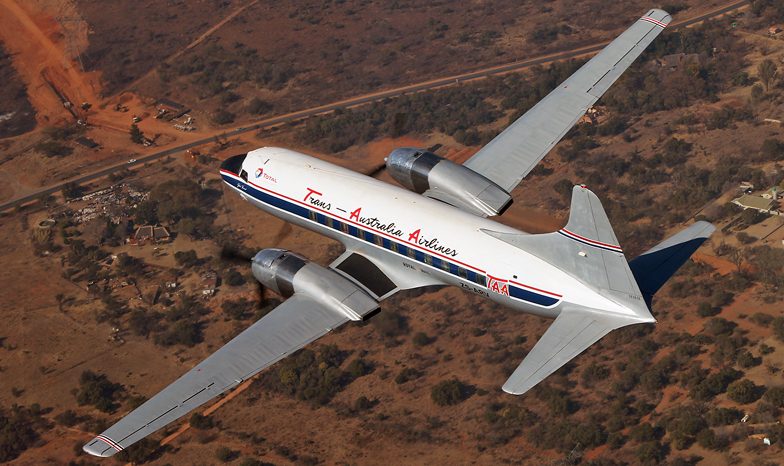 The Convair 240 / 340 / 440 family of airliners was produced between 1947 and the mid 1950s as a successful attempt at a DC-3 replacement. It was the first twin engined, pressurised airliner. After a false start, the configuration of two R-2800 engines and 40 seats was settled on – hence the “240” as the model number. An interesting feature of the 240 series was the “air-stair” at the tail, similar to that which became normal on the DC-9 and Boeing 727.  First flight was in March 1947. The success of this design can be seen by the numbers of updated airframes still flying commercially around the World

Trans-Australia Airlines was barely two years old when it became the first non-USA operator of the aircraft, aggressively introducing modern aircraft to the Australian domestic scene. TAA, whilst they only operated the 240 series, they did so till 1959.

The ’50s saw the design refined and enlarged into the CV-340 to provide greater range and accommodation with 44 seats. The CV-440 was a further refinement intended to compete with newly introduced turbo-props however in its piston engined form, the CV-440 “Metroliner” had reached its limit.  When production ceased in the mid ’50s, nearly 1200 aircraft in this family had been produced.

Convair 340 and 440 aircraft are almost identical with the 440 series being essentially a refined variant of the former with improved sound proofing and greater takeoff weight through various refinements. Externally, a 440 can be identified by rectangular exhaust stacks and in some cases an elongated nose, originally conceived to house early weather radar, though this is not necessary today.

A few facts about the Convairs:

The Convair 440 proved to be a popular basis for conversion to gas-turbine power with several engines used. Two that spring to mind are the Allison 501 (military designation T-56) and the Rolls Royce Dart, with the former being the more common. Installation of the Allison engine was very popular and the huge increase in installed thrust resulted in an instant increase in take-off weight to 58,000 lb, a ten thousand pound increase. Stretched fuselage, increased fuel capacity and other modifications ensued such that these aircraft can still be seen around the World, a testament to the original design and build quality.

The US military bought a number of the Convair 240 / 340 family – with the C-131D and later being 340 variants purchased between 1954 and 1956. A “Mid-Life” update program was applied to many to bring them to “440” standard and they are covered in the appropriate FAA manual as Convair 440 aircraft. The USAF and USN used their own designations for the engines, however they are each considered to be CB-16/CB-17 engines.

Most recently, this aircraft was owned and operated by Rovos Air (as ZS-ARV), a subsidiary of Rovos Rail in South Africa. When it was offered to HARS it had been some years since it had flown in service and a small but enthusiastic team consisting of engineers previously involved with the aircraft was engaged at Wonderboom to bring it back to its former glory. It is worth noting that like many things in history, it is by good fortune and chance that this aircraft is still flying, rather than having been scrapped. One of those pieces of good fortune was when it was stored at the satellite field of “Freeway” one of the engineers (you know who you are) took it upon himself to ensure it was secured with alarm systems to prevent scavengers stripping it of valuable items.

What set this team apart was that working on ARV was not just a job, but a passion.

Visitors to HARS who go on board this aircraft will see what a wonderful aeroplane it is and how Rovos spared no expense as part of its Rail Packages to ensure its customers had a first class experience. When you realise that this fit-out is for the standard 44 seats, you realise how “economy” has been “economised” over the years.

We had to decide on a paint scheme. Part of us wanted to keep the Rovos scheme to advertise for them, we felt that strongly however that was not to be and we had to decide. There was only ever one long nosed 440 in Australia and that was one of the two aircraft in 34 Sqn, but there’s the rub. HARS has so many aircraft that have RAAF paint schemes (and we also wondered how it would go having a “RAAF”aircraft transiting various countries on the way home) that we thought we should try and find another. ANSETT was thought of, however they never had a “long nose” and in the end a period TAA paint scheme was decided on, and we also were able to get the VERY generous transfer of that “VH-TAA” registration so that it all became obvious.

So, if you ever wonder why we chose that paint scheme, there you have it.

Finally, everyone at ROVOS were fantastic. If you want to try a really different holiday, I can only recommend them.