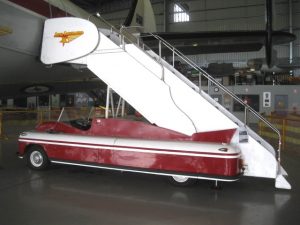 In ~1958 Qantas Technical Services Division saw the need for a modern motorised air stair to complement its newly ordered Boeing 707 jet airliner which was due to enter service in 1959.

A team of Qantas engineers lead by George Roberts designed the all hydraulic stairs around readily available Ford car components.

The Air Stairs were designed to be disassembled and to easily fit into a DC3 for transport to other locations around Australia.

However, in spite of being able to be broken down for easy transport, there is one famous instance a set of air stairs being driven all the way to Alice Springs from Sydney.

The pictured Air Stairs are beautifully restored and feature a four cylinder 105E Anglia motor.  They were meticulously restored by HARS members Peter and Allan Costigan, together with the sign-writing skills of Allan’s wife Nicky Costigan.