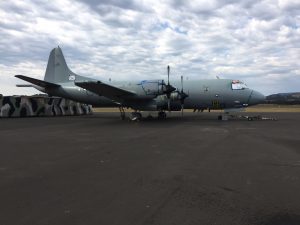 For over Sixty years, the RAAF has followed the US Navy choice of maritime aircraft, first with two versions of the Lockheed Neptune and then the Lockheed Orion, both being highly successful and widely used aircraft.

During the late fifties, the Lockheed Orion was developed in parallel with the Electra airliner and entered service with the US Navy in August 1962 with the designation P3V-1. This only lasted a month though since in September of that year the US adopted a unified set of designations and so the designation became P-3A.

The P-3B started replacing 11 Sqn P-2E aircraft in 1968 and the Squadron moved to Edinburgh, and then ten years later, 10 Sqn started receiving P-3C aircraft and moved to Edinburgh also. During the course of the Orion service, the P-3B were traded in for new P-3C aircraft and then in the early 2000s, the fleet was progressively modified to AP-3C standard. The RAAF will continue to operate the P-3 until it is replaced by the Boeing P-8 Poseidon and Northrup Grumman MQ-4C Triton (an unmanned aircraft) in around 2021. This will mean the P-3 would have been in continuous RAAF operational service for 53 years.

In RAAF service, the AP-3C was operated by aircrew from Number 10 and 11 Squadrons, maintained by technicians from 492 Squadron and trained by members of 292 Squadron (all located at RAAF Base Edinburgh near Adelaide). You will see these Squadron crests under the left cockpit window.

The Orion normally carried a crew of 11. Missions would normally last around 8 hours in the air, but could go up to around 12 hours. The aircraft carried the AGM-84 Harpoon anti-ship missile, MK46 torpedo, anti-ship mines and also search and rescue equipment.

In 2012 the RAAF Orions ceased 10 years of operational service in the Middle East, completing 2,400 missions with more than 3,500 personnel deployed throughout the period. Australian Orions are still currently deployed on Operations RESOLUTE, GATEWAY, SOLANIA providing support to Border Protection and Fisheries patrols within the South East Asia and Pacific regions. Notably, the AP-3C Orion was the primary Australian aircraft utilised in the search for missing Malaysian Airlines flight MH370.

HARS Orion A9-753, has accumulated some 16,400 hours and participated in most RAAF P-3 operations including the search for the missing MH370 Airliner, Operation Gateway and numerous deployments to the MEAO (Iraq & Afghanistan).   She was delivered by to the RAAF on 04 Aug 1978 (Built 20 May 1978).

Our AP-3C Orion carried the serial number A9-753 (and still does – look at the nose gear doors on the inside – why is it on the inside and not the outside?). The civilian registration will be VH-ORI.

Our Orion in the MH370 Search