During the mid-sixties, both aircraft and engine manufacturers were in the process of updating their products from those of the initial jet era.  There were new large aircraft that needed more powerful and economical engines.  Three engine manufacturers were looking at these new requirements.  General Electric started with its TF-39 (developed into the CF-6), and Pratt and Whitney were developing their JT9D to address the USAF Very Large Transport competition requirements.  Ironically, the JT9D and Boeing were the losing designs, however out of these grew the 747 air-frame and engine combination.

During research into a basic design for the long-term development of the company, Rolls-Royce determined that if they could develop a three spool engine then they would be able to match the air mass flow better to the compressors, provide superior fuel consumption and a much better path to even higher thrust engines.  The RB211 was one of a proposed family of these engines.  Now while the triple spool design had advantages, it was also over 1,000 lb heavier than the competing engines, as you can see from the list below.

Since I mentioned it above, it is worthwhile talking about Specific Fuel Consumption.  An SFC of 1.0 means that theoretically, an engine could give 1 lb of thust for 1 hour and use 1 lb of fuel.  A practical example is the takeoff run of a 747.  At full thrust (60,000 lb per engine) the fuel flow is about 22,000 lb per hour so the the SFC would be about 0.33.  I know this is in disagreement with the figure I have put above, however in cruise, the fan gives a far lower proportion of thrust than at takeoff, so the SFC will be higher – 0.6 in this case.

Some example SFC from engines:

One of the innovations proposed for this engine was the material proposed for the main front fan stage – a new, high strength, light weight carbon fibre material called Hyfil.  First engine runs were in 1969 and the initial thrust of ~33,000 lb was gradually increased with testing, to ~40,000 lb.  In May 1970 however,  the massive 33 blade carbon fibre fan failed bird strike tests and Rolls Royce had to switch to using a heavier titanium alloy.  This major setback with other delays and redesigns forced the cost of the engine’s development to spiral upward to more than ~£UK170 Million by September 1971 and forcing Rolls-Royce into insolvency.  The British Government nationalised the company allowing completion of the project and to fulfil orders.

Initial Qantas 747-200 orders used the JT9D-3A engine at around 46,000 lb of thrust, increasing to 50,000 lb with the use of water injection on takeoff.  These proved very temperamental in use, with a number of turbine failures and more commonly, compressor stalls.  After a few years, these were upgraded to the -7A engine (giving an extra 2,000 lb thrust both Wet and Dry) and this soldiered on in Qantas service until the RB211 replaced it and the Pratt and Whitney fleet was sold off in the early Nineties. I mention the JT9D here as a comparison to the RB211 and what a difference the latter engine made when it was introduced. The JT9D-7A, allowed a takeoff weight of 352,000 kg.  It made takeoffs from certain airfields, particularly Athens at midnight in Summer at 30 deg C all very exciting with the last 500 ft of the runway flashing under the aircraft as it rotated and lifted off.

About 1980, Qantas ordered its first 747 aircraft with the RB211-524D engines and takeoff weight went up to 375,000 kg.  I mentioned Athens and the JT9 aircraft earlier because under the same conditions, and twenty tonnes heavier with no water injection needed, the RB211 powered aircraft simply and easily departed.

Another aspect of the superiority of the RB211 was shown by Qantas fitting the engine to its two 747-SP aircraft.  Whilst these were initially purchased to operate into a short airfield, once they were deployed flying trans-Pacific from the West Coast of the United States to Sydney they demonstrated their fuel economy in being more reliably able to do the journey in one hop as opposed to the Pan American SP aircraft powered by the JT9D.  The joke was that Pan Am sold Auckland – Sydney tickets on their Los Angeles – Sydney service.

In the latter part of the Eighties, the 747-400 was on the horizon and Rolls-Royce proposed the RB211-524D4D engine, a major advance with significant fuel savings over the D4 and an increase in thrust to 58,000 lb.  Someone eventually decided the nomenclature was getting too long and so the engine was renamed as the RB211-524G.

It is well worth comparing the older RB211 we have (as used on the 747-300) with the later one as fitted to OJA outside.

When airlines purchase aircraft or engines, they have guarantees written into the contract, such as fuel consumption.  For the first few months of -400 operation, Rolls-Royce engineers flew on many sectors monitoring fuel consumption.  A lot of work was done to improve the engine economy and eventually Rolls Royce had to concede that the engines weren’t going to get to that contracted consumption figure.  That is when the Trent core was introduced, becoming an RB211-524GT.  There would often be a mix of the two engine types on an aircraft and it was fascinating to see the stark differences in EGT and Fuel Flow the modified engines gave. 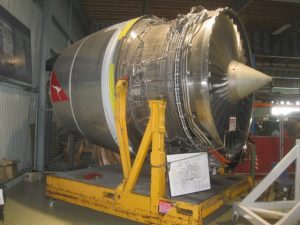