The Westinghouse J34 is a simple, robust engine that traces its history to the very beginning of jet engine development in the United States.  In late 1941 the US Navy asked Westinghouse Electric Corporation to commence designing a jet engine for future navy fighters.  At this time, the only jet engine in the United States was the first Whittle engine with a centrifugal compressor.   Right from the start, they settled on an axial flow design rather than that adopted by Whittle in his engines.  This was a more advanced technology as it required more precise manufacturing and high temperature metals.  Germany had also settled on an axial design for its engines however the lack of materials resulted in poor reliability (about 10 hrs running time) compared with the then British engines (about 300 hours). 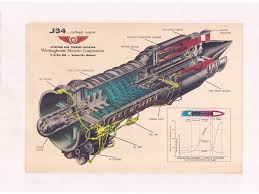 The first engine Westinghouse built was designated the J30 and first ran in March 1943 and flew under a Corsair fighter in January 1944.  At the time of its first run, it was only the second axial flow engine to successfully run outside Germany, quite a feat.  It was however only the first design and in fact available British engines with a centrifugal compressor were more efficient.  Interestingly, the J30 ran on the then common aviation gasoline.

Whilst there was a J32 engine, the next major type was the J34, basically a scaled up J30 with more compression stages.  It had a higher compression ratio and was more efficient, however still only comparable to British engines.  The J34 first ran in 1947 and was used to power several early jet fighters.

Despite its simplicity and reliability, it was realised in 1955 that the J34 had reached the end of its usefulness and it was decided to cease production.  As sometimes happens, events overtook this and the engine was a perfect match to boost the performance of the P2V Neptune patrol aircraft.   Lockheed proposed an elegantly simple solution, simply bolting on a single J34 jet outboard of each of the Neptune’s Curtis Wright R3350 piston engines for use during takeoff or high speed dash.  The US Navy had to rethink its termination of J34 contracts and accordingly the US Navy issued new production contracts and Westinghouse restarted production, with the engine using aviation gasoline as fuel this time, instead of the normal JP-4.

Famously, Ken Warby set a World Water Speed record of 511 km/h (317mph) in a hydroplane boat Spirit of Australia powered by a single J34 built up from 3 surplus RAAF engines.