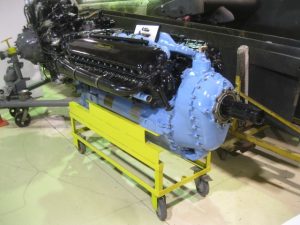 The Allison V1710 was a robust, powerful V12 supercharged piston engine of some 1,710 cu inches (~28 Liters) first designed in 1929 by the Allison Division of General Motors to meet the US Army Air Corps (precursor to the US Air Force) need for a 1,000 bhp class aircraft motor.  Whilst the initial intention appears to have been for airship applications, this never happened.  In 1937 it ran continuously for 150 hours  at its then rated 1,000 bhp.

Since the V1710 was the only V12 liquid cooled engine in the United States, comparison with the Rolls Royce Merlin is inevitable, and the general consensus has not been kind to the Allison.  This is somewhat unfair, since the V1710 was a simpler, more robust design.  It could easily be modified for example, to run the crankshaft in the opposite direction, unlike the Merlin.  It is common knowledge that the Allison was also limited to combat below 15,000 ft owing to its single stage supercharger and that the P-51 was “rescued” by the fitting of the Merlin to replace the Allison.  Once again, this comparison is a little unfair since it was the Army Air Corps that insisted on the single stage supercharger, relying instead on a turbocharger if high altitude performance was needed.  Unfortunately, metals needed for a turbocharger were in short supply during the conflict and so the decision to reject the supercharger solution was shown to have been the wrong one.  When fitted with a turbocharger though, the engine performed magnificently in the high altitude role, as shown by its fitment to the P-38 lightning.

Of the three fighters to be designed around the Allison engine in the thirties, only the P-38 was initially designed for the high altitude role, both the others, the P-39 Airacobra and the P-40 Kittyhawk were hampered above 15,000 ft by the single stage supercharger.  It was thought when the P-39 and P-40 were designed that air combat at high altitude would be unlikely and that the single stage supercharger would be sufficient.  In the event, history showed otherwise, however in Soviet service, both the P-39 and P-40 were highly successful since combat on the “Eastern Front” took place at lower levels.

In service the Allison proved to be very reliable and ultimately powered 60% of all US Army Air Corps fighters.  Many different versions of the basic motor were built with the ultimate being the V1710-143 rated at ~2,300 bhp. Interestingly, by using mass production techniques the Allison used ~50 % less parts than the British equivalent Rolls Royce Merlin which was more hand finished.

Our engine was recovered from the rear yard of a home in Yarrawonga, Victoria in November 2008.