The DC-3 was originally designed in America in 1935 by the Douglas Aircraft Company for a long range passenger aircraft for American Airlines.  It was first flown in December 1935 and could carry ~20 passengers at ~300km/h for ~1600km or ~1000miles.  The military version of DC-3 is officially called C-47 Skytrain (US Army Air Force), or Dakota (RAF, RAAF, RCAF), and was also nicknamed Gooney Bird. 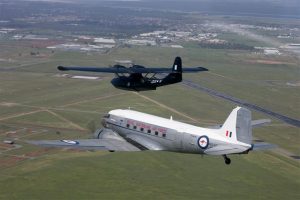 The DC-3 was used extensively during WW11 by the Allies for supplies and parachuting troops behind enemy lines.  It was extensively used in D-Day operations and could tow troop gliders.  Two of the HARS aircraft have a towing ring in the tail to tow a troop glider.

The military version also has double-width cargo doors and strengthened floors and could carry up ~28 paratroops or ~2.5 Tonnes of cargo or ~18 Stretchers.

The DC-3 is a very strong rugged aircraft.  There is a famous quote that says: “The only aircraft that can replace a DC-3 is another DC-3”.

There are still more than 300 flying examples worldwide.

Both aircraft were flown by the RAAF in New Guinea and the South West Pacific theatre during WW11.  But on 9 May 1963 A65-94 was part of C flight, 2SQN based at RAAF Butterworth, opposite Penang Island, Malaysia.  She flew the first operational mission of the Vietnam War, delivering food and medical supplies to refugees fleeing the fighting.