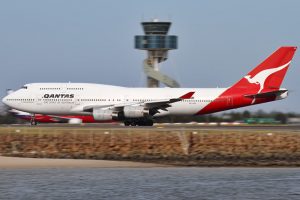 There is no doubt that the Boeing 747 is one of THE aircraft designs that will stand out in the history of aviation development.

When we at HARS welcomed OJA to our home at Albion Park, we were more than excited – we had left the term “excited” behind several previous levels of superlatives ago.  Many of us at HARS remember when OJA joined the Qantas fleet, we were Engineers representing Qantas at the Boeing factory when she was being built and then maintained her and the rest of the 747-400 fleet for all those years, we were Pilots who flew her from the beginning and amassed thousands of hours of flying on the -400, we were Cabin Crew who crewed her and hosted passengers on her for many years.  It meant a lot to so many of us that she was not retired to the scrap yard but was preserved to represent this stage of aviation history.

There are at least three (perhaps more) aviation icons in Australia representing the defeat of distance.  The first is Ross and Keith Smith’s Vickers Vimy which now has pride of place at Adelaide Airport.  The next is “The Southern Cross” at Brisbane Airport (HARS is currently restoring the Southern Cross II to flying condition) and the third is OJA, the twelfth 747-400 built that finally smashed the barrier of London to Sydney in one sector.

What’s in a Name?

We say that this is a “generic” 747-400 and yet people get confused when the precise designation is “747-438“.  The explanation to that is that “38” is the Boeing customer number for Qantas.  Any aircraft they make for Qantas has that suffix.  For example the Boeing 767-300 series were “767-338” aircraft.  Similarly, British Airways is customer number 36.

Longreach.  This is the “class” name that Qantas gave the 747-438.  In 1988, Qantas ran a competition amongst staff to name the new model of 747 they would be taking delivery of.  There were many names .. “red tips” springs to mind as one of them.  One of the Captains by the name of Len Krawczyk submitted “Longreach”.  If you knew anything of Qantas history, once you saw that submission the name was obvious – and the rest was history.

OJA.  This is the registration or “number plate” of the aircraft.  The complete one being “VH-OJA”.  Engineers and Crew refer to the aircraft by their registration.  If you ask them what the aircraft “name” is, they would be unlikely to know and would have to look it up.  So the aircraft at HARS is referred to as “OJA” as if that were its name.  It will never be anything else.

The Significance of the 747

It is easy to think of the 747 as just a big 707.  That view is totally wrong.  The 747 is one of the masterful aircraft designs. It is one of those rare aviation pinnacles.

We can think of it this way:

When the 747 was introduced, it represented a quantum leap in aerodynamic sophistication, systems redundancy and structures.  The only weak point was the engines, though this was rectified fairly quickly once the CEO of Pratt and Whitney went for a fly in one. If there was one phrase to describe the 747 on its introduction, it was “over-engineered”.

A revolution in air travel happened.  Whilst the beginnings of this were evident in the sixties, with the 747 the floodgates opened.  Nowhere better to illustrate this than Perth, Western Australia and the 1962 Commonwealth Games.  For those games, a brand new passenger terminal was built at Fremantle harbour, able to cater to two passenger liners simultaneously, and at Perth Airport, a new combined domestic and international terminal was built to replace the “shed” that had served up until then.  By the time the 747 was in regular service, the shipping terminal was all but deserted and the airport was elbow room only.

The entire demographic of air travel changed and the era of mass transportation had arrived.  A long way from the Duke of Wellington in the early 19th Century when he expressed the view that “he was opposed to railways, because they enabled the common people to travel”.

During the first 15 years of its development, the 747 gradually increased the number of passengers it could carry and increased its range.  In the mid eighties it became apparent that technology had reached a point that computer monitoring and “television” screens could replace the traditional instrumentation and the flight engineer.  It was estimated that replacing the flight engineer alone would result in savings of over a million dollars per year per aircraft.  This saving resulted from the numbers of flight engineers that would no longer be required.  Typically airlines plan on six to eight crews per aircraft.  Computer monitoring would also enable crew to more easily manage checklists and aircraft systems, and maintenance personnel to more quickly troubleshoot problems.

Whilst “Glass Cockpits” are the standard now, at that time it was a major effort to integrate it into the 747 flight deck.  Boeing had done a “first generation” glass cockpit in the 767, however this extended it.  More powerful engines, increased takeoff weight and an extra ten tonnes of fuel in the horizontal stabiliser allowed trans-pacific range and Singapore to London with a full payload.  Northwest placed the first order, followed by United and Qantas – the three launch customers.  Northwest operated the first commercial passenger service in February 1989 on the 20th anniversary of the first B747-100 flight.

The initial Qantas order was for 18 and unlike the other two launch customers, the engines chosen were the Rolls Royce RB-211.   Our aircraft, was the first Qantas 747-438, the twelfth -400 produced, accepted on the 11th August 1989 and called “City of Canberra”.  Her official registration is VH-OJA, and she holds the world record for the longest non-stop flight by a commercial aircraft – London to Sydney in August 1989 for a total flight time of 20hrs and 9 minutes at an average speed of ~893 km/h for a total distance of ~18,012km.  During that flight, there were just 23 passengers and crew and the aircraft used a special blend of high density fuel to enable it fly the record distance.  The extra fuel density enabled about an extra ten tonnes of fuel, increasing capacity to about 183 tonnes for the flight.

HARS acquired The City of Canberra on 8 March 2015 as a gift from Qantas after Qantas cancelled a plan to retire her to an ‘aircraft graveyard’ in Victorville, California and instead donated the historic aircraft to HARS to be preserved.

Her final flight from Sydney to Illawarra Regional Airport was just ~12 minutes, the shortest delivery flight by a Qantas 747 and the first (and probably only) time this aircraft type has landed at our airport.  The flight was several months in planning including the pilots spending more than 25 hours in a flight simulator in preparation.  The arrival was watched by tens of thousands of people gathered at all vantage points around the airport.

For a history of VH-OJA and a collection of great images, go to here.

NOTE:  A plaque inside OJA lists her takeoff weight as 394,625 kg.  This was the weight certified at delivery, and under certain circumstances can still be a limitation.

The Life of OJA

Australian Aviation published an article about the 747 and the Premium Tours in its January/February 2017 edition.  It can be read here.