Skip to content
Home » “The Last of the Hotrods” VH-EBM 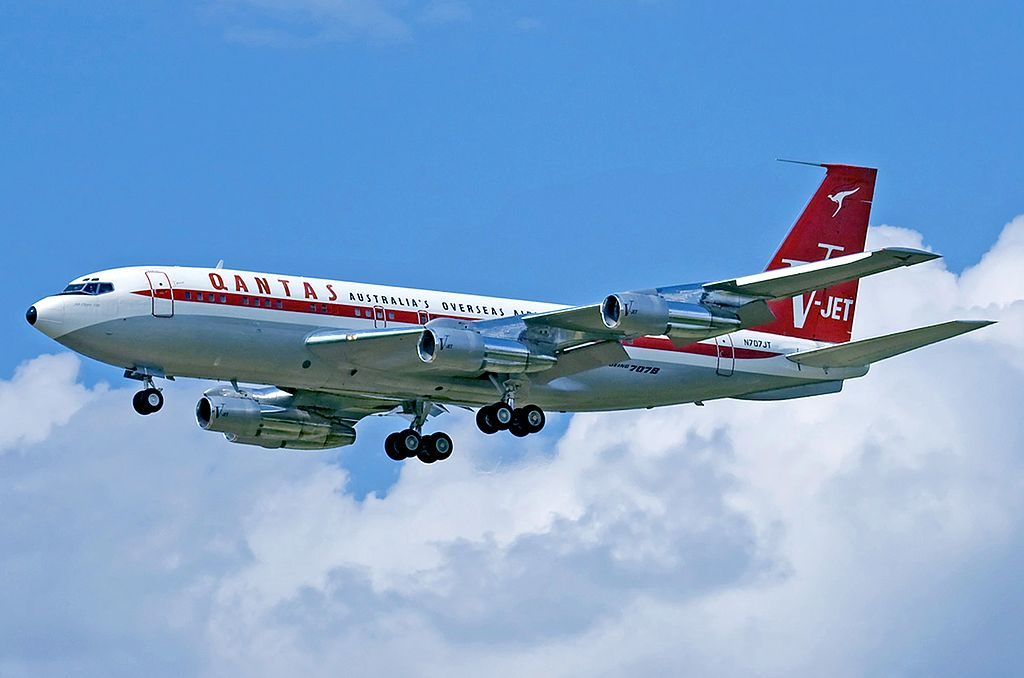 John Travolta has donated his 707 to HARS. Saves us having to paint it in Qantas colours I guess …. BUT .. what is so significant about this aircraft? Well, it is not JUST a Boeing 707. It is a special model built only for Qantas right at the start of the jet age. It represents the time Qantas and Australian aviation made the jump from radial-engined propeller aircraft into jets and allowed us to shrink the World.

In the mid-50’s, there were two jet transports you could order. The Boeing 707 (which had yet to fly) and the De Havilland Comet. Unfortunately for the Comet it had recently had some spectacular disasters, and it was smaller and slower than an airline like Qantas wanted. The first 707 model, the “120” series flew in 1957, with its empty weight being almost that of the maximum takeoff weight of the Comet, and considerably faster. Unfortunately for Douglas, they had been caught flat-footed and their entry was at least another year away.

I should inject a story about the Comet sales flight to Sydney, to show how times have changed. On its first approach to Sydney airport, the Comet 4 (which was a fine aeroplane) had to conduct a missed approach. The reason? There were too many people on the runway.

1958 and Qantas became the first foreign customer order for the 707, with customer number “38”, hence the designation 707-138. One twist though is that the aircraft was shortened by 10 feet to lower its empty weight to improve airfield performance and enable greater range .. sort of an “SP” 707. The result was that we had a 707 with the standard takeoff weight of 247,000 lb and the “civilian” J-57 (JT3C) engines producing 13,000 lb of thrust (and a long black smoke trail). Boeing built 13 of these aircraft for Qantas special requirements.

Now, if you know much about aircraft, you know that a special order and configuration like that are very expensive – how could Boeing do a special batch of 13 like that while avoiding expensive development costs? As it turned out, they already had a very similar aircraft in production – the Boeing 717 which we know as the KC-135 tanker. The KC-135 is all but identical in configuration to the -138 series they wanted to build, just a couple of inches narrower fuselage. So with minor modifications, they were effectively able to use the KC-135 development to build the Qantas batch.

Of the thirteen produced, the first is at the Qantas Founders’ Museum in Longreach, there appears to be one other still flying in Africa and then there is the last one, coming home and a neat “bookend” to this chapter of history. You can have a look at these by visiting http://www.aussieairliners.org/b-707q/707index.html . Aussieairliners is a website associated with HARS and has an extensive database of airliners.

So there we have it, the “last of the hotrods” coming home to be maintained by experienced engineers and flown by experienced pilots – representative of a unique variant of the first model Boeing 707 to go to the first non-US customer of that type.

It is easy to get confused by the early Boeing jet airliner development. Especially when there is so much false information out there – as an example the claim that Tex Johnson barrel-rolled a 707. That claim is untrue as it was NOT a 707 he did that to but the technology demonstrator the 367-80.

When Boeing decided to build a jet airliner, they did not want to let their competitors know, so they used the model number of a current airliner and added the “-80” moniker to mis-lead. They used the -80 as a demonstrator and to prove various technologies for a subsequent airliner design. To name the new series of Jet transports, they decided to use a “7” series, and the name “707” had a nice ring to it.

In the meantime though, the USAF had a need for jet tankers to refuel their B-47 and B-52 bombers and so that became a priority (well, a multi-hundred aircraft order one would think it was a priority). Consequently the tanker design was done first, and this would also help them refine what was needed for their airliner. The “707” model number was already taken so they used “717” for the tankers. This was a developed version of the -80 with, amongst other things, lengthened and larger diameter fuselage.

With the initial experience from the 717 / KC-135, Boeing completed the 707 design, further lengthening and increasing the diameter of the fuselage.

Now it gets complicated and messy. For the Qantas order, they used the development data from the KC-135 to shorten the 707 fuselage. From that they thought the -138 would be a good basis for a shorter range domestic transport and so the 720 was born. For a little while they wanted to market it as a 717, but soon dropped the idea.

Way down the track when Boeing took over McDonnell-Douglas, they wanted to integrate the MD-95 into the Boeing family and since they had never officially used the “717” term in marketing, they called it the 717. It would be interesting what they printed on the manufacturer’s plate – I’m thinking MD-95.

So there we have a horribly convoluted tale of how it all was. I commend the appropriate Wikipedia pages for you further reading.