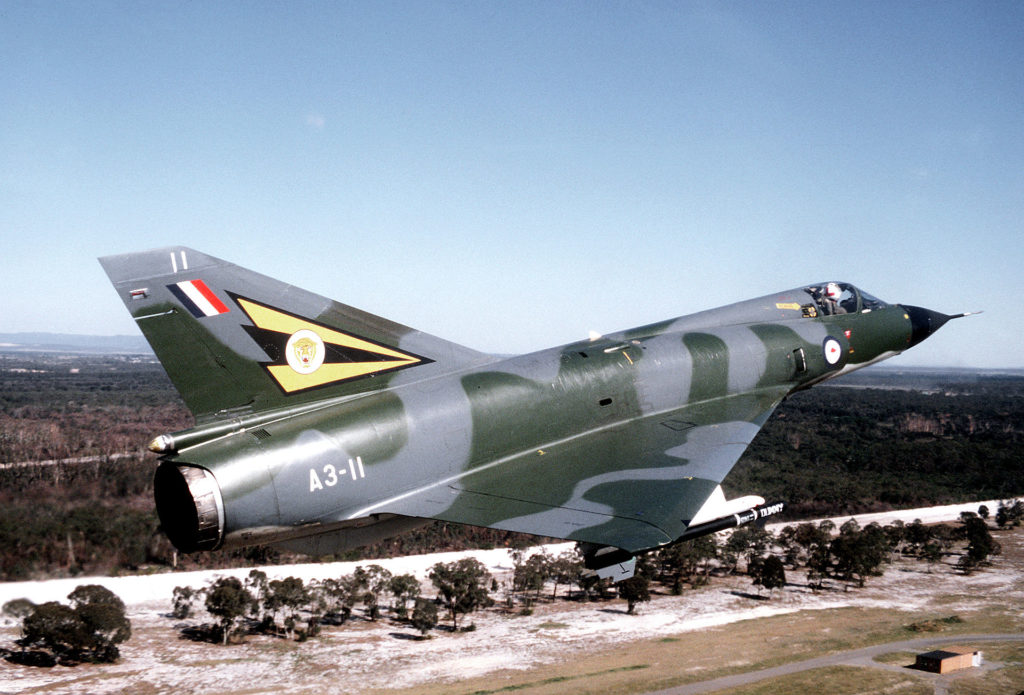 The “Fifties” saw the intensification of the “Cold War” and during that decade the Mirage III came to life, one of several “classic” fighter designs including the F-104 and Mig 21.  Despite their different approaches, these three aircraft were very close in over-all performance.  It is interesting to note that much of the basic technology of the Mirage III is derived from World War II German research.  Delta Wing aerodynamics and the ATAR engine which is based on a BMW engine.  The final piece of research that allowed Mach 2 flight was the “Area Rule” concept discovered by NACA (National Advisory Committee for Aeronautics) in the early fifties.  Area Rule is that design feature that gives supersonic aircraft that “coke bottle” waist.

Générale Aéronautique Marcel Dassault (GAMD, later known as Dassault Aviation) first started to develop what would eventually become the Mirage III single seat interceptor fighter/bomber in 1953 in response to a French Government requirement and seven years later after a number of test vehicles and prototypes the first production version, the Mirage IIIC flew.  The initial task of the Mirage III was intended to be high-altitude intercept at 60,000 ft and to that end, a rocket engine pack was incorporated under the fuselage just at the aft part of the wing.  Initial operational experience was not up to expectations, since installation meant the 30mm cannon armament had to be removed and the rocket pack gained a reputation for setting fire to the aircraft which was not ideal.  The threat of high altitude bombers receded and so whilst it could still be fitted, the pack was rarely used.  Not long after in April 1961 the Mirage IIIE flew, introducing more capability in both air-to-air and air-to-ground roles.  The Australian Mirage was essentially a Mirage IIIE with alternative avionics.

Whilst Dassault went on to develop more advanced fighter designs, the Mirage III / 5 family continued in production into the 1980s, assisted by the ability of the airframe to adapt.  There was even a VTOL version developed called the Mirage IIIV Balzac.  All in, over 1400 aircraft were produced.

Australia and the Mirage

During 1960, the RAAF started the process of evaluating a replacement for the CA-27 Sabre.  Whilst the F-104G was a contender, the ultimate choice was for the Mirage IIIE.  Dassault had experimentally built an Avon engined Mirage and had investigated air-air refuelling for it, however the final decision was to stay with the standard IIIE.  The variant was dubbed the Mirage IIIO, “O” being for “Orstralian”. The initial order was placed in late 1961.

The first French-built machine was handed over to the RAAF in April 1963 and progressively local manufacture introduced more and more Australian content.  A3-11 was the first built from parts, albeit French primary parts and A3-16 was the first all Australian aircraft.  A total of 114 aircraft were delivered to the RAAF, with two single seat variants and a two seat trainer.  The single seat variants were the Mirage IIIO(F) interceptor and the Mirage IIIO(A) ground attack variant, the “A” aircraft also being capable of air to air operations.  Basic armament was twin 30 mm DEFA cannon (based on German Mauser cannon) with two Sidewinder or Matra 550 air to air missiles.  A selection of drop tanks and bombs could also be carried.

No 75 Squadron became operational in 1965 and the last RAAF Mirage flight was on 8 February 1989, making the Mirage the longest serving fighter in RAAF history.  During that time, of the 114 aircraft delivered, 40 were lost in accidents.  After retirement, fifty were sold to the Pakistan Air force in 1990 with the rest being acquired for museums or scrap. 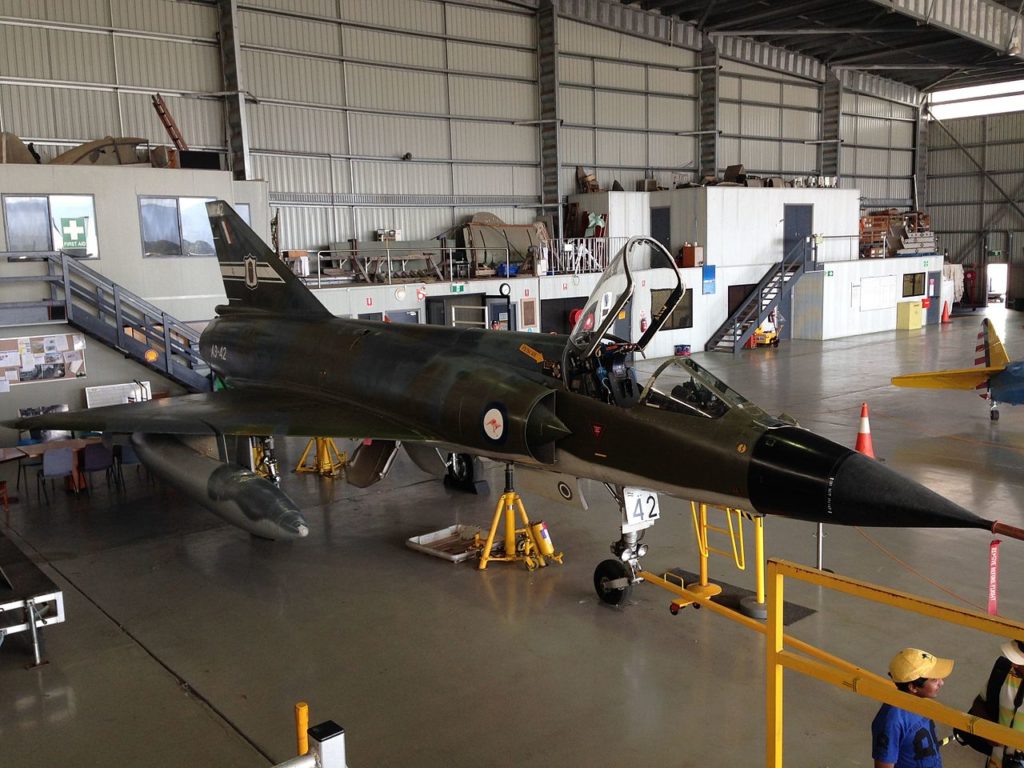 Our aircraft, A3-42, an IIIO(F) interceptor, was delivered on 1st August 1966 and served with 75 Sqn at Butterworth, Malaysia until late 1969.  The aircraft then went to 76 Sqn at Williamtown for a few years and then allocated to 2OCU (Fighter Operational Conversion Unit) and converted to a ground attack variant.  After serving time with 77 Sqn it was retired from service in October 1987 with 4,015 hr on the airframe (initial expected design life was 1500 hrs) and used as an apprentice training aid to RAAF Base Wagga Wagga.  All Mirages were retired in 1988 and replaced by the F/A-18 Hornet.

HARS acquired the aircraft in March 2015 and whilst airworthy the intention is to restore it to a taxi able condition.

Being a Student on an Instructional Sortie

And finally, a bonus video – flying over the Alps.  Note that these aircraft show the later development of the Mirage III with Canard foreplanes.  The video is lacking detail, a result of being filmed so long ago, and gets choppy part the way through – but well worth the viewing.