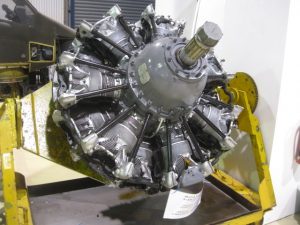 A very reliable American designed radial (the cylinders “radiate” from a central crankcase) aero engine.  It has 14 cylinders (2 rows of 7) of some ~1,830 cu in (~30 L).  It was first built in 1931 by Pratt & Whitney Aircraft of East Hartford, Connecticut to meet the need for a 1,000 bhp class aero engine.

Initially rated at only ~750 bhp, the engine was refined to produce a consistent ~1,100 to 1,200 bhp (depending on the octane rating of the petrol used) by the start of WW11.

Officially called the “Twin Row Wasp” (it was part of the Wasp series of engines),  It was the first radial aero engine ever made with two rows of cylinders.  Note how the front and rear rows of cylinders are “off set” to allow cooling and reduce engine depth.

Generally just called the “Eighteen Thirty” in the aviation industry, one of is first uses was in the famous 4 engine China Clippers seaplanes of Pan Am in 1935 and later the equally famous DC-3 passenger airliner transport and Catalina Flying Boat soon after in 1936.

It is outstandingly reliable.  The motor was affectionately called “Mr Pratt and Mr Whitney” by aircrews in WW11 who would often return back to base and discover that whole cylinders had been shot off their engines by enemy fighters but the engines were still reliably running.

One of our display 1830s came off our HARS Dakota A65-94 when it “dropped” a valve whilst flying.  Despite tremendous damage to one cylinder the engine was still running and the pilot had no indication there was anything wrong on his instruments.

It is arguably the greatest piston aero engine ever made, with exactly 173,618 produced by Pratt & Whitney.  It was also manufactured by Buick, and Chevrolet in the USA and the Commonwealth Aircraft Corporation here in Australia in the period 1932 to 1951.